In a double-blind, placebo-controlled study performed by Daacro GmbH & Co KG, Trier-CRO specialised in the testing of stress, the primary end-points were to test the possible effect of YTE in acute stress (TSST). The study specifically looked at:

The study showed that the participants taking YTE scored significantly lower in the subjective acute stress under TSST compared to the placebo group (graph below to the left).

In the group of chronically stressed TSST resulted in a higher increase in cortisol-release in the active group versus the placebo. While in the group without chronic stress TSST resulted in a lower increase in cortisol-release in the active versus the placebo group. This demonstrates that YTE normalises cortisol release. (Graph below to the right). 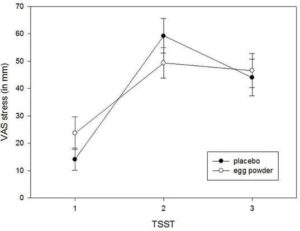 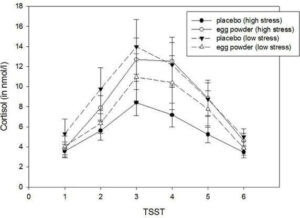 You can read this entire studies published paper on this link.

Effects of Powdered Fertilized Eggs on the stress response

Published in the Journal Of Medicinal Food a 12 week double-blind, placebo-controlled study investigated the effects of YTE® intake on outcome measures for depression. Fifty-five patients with depression were randomly assigned to receive YTE®, YTE® plus Melissa officinalis, or placebo for 12 weeks. At baseline, there were no significant differences in scores on the Hamilton Depression Rating Scale (HAM-D) or Beck Depression Inventory II (BDI-II) among the 3 groups. At 12 weeks, the HAM-D scores in groups treated with YTE or YTE with M. officinalis were both significantly lower than those in the placebo group. In addition, both treatment groups showed a significant improvement in depression as measured by the change in HAM-D scores from baseline to 12 weeks, whereas the placebo group showed no significant change. There were no significant differences between the 2 treatment groups. The study indicates that the fertilised egg powder has an anti depressive effect and may be an alternative or adjunct to anti depressive medication for some patients. 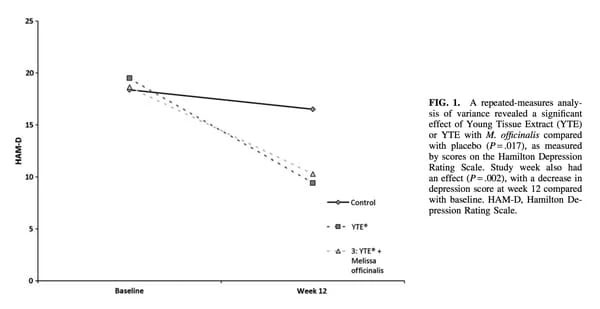 You can read this full study on this link

Professor Törnblom conducted a six-week, double-blind placebo-controlled study at the University of Colorado and Arapahoe Community College involving thirty-two men and women ages nineteen to thirty-five. The study compared the effectiveness of two nutritional supplements in increasing muscle strength and muscle mass. The effects of taking 5 grams of a 50/50 blend of YTE and creatine were compared with taking only creatine monohydrate (5 grams). Results are shown below.

Stem cells are a major topic of discussion, and for good reason.

Stem cells are the very beginning cells, which build the whole body of the organism, including humans [1].

Our knowledge is increasing all the time. For example, researchers reported in September 2018 the discovery of skeletal stem cells in humans, the precursor to bone, cartilage, connective tissue, blood vessels, and the bone marrow’s support cells.

Stem cells have a remarkable ability to replicate and generate a specific cell required by body.

The division of stem cells will produce two cells, which may become new stem cells or differentiate into specialized cells with specific functions as well [2].

Diseases or physical disorders occur in connection with cell damage, including Parkinson’s, diabetes mellitus, autoimmune disorders and other diseases.

Potential therapies to cure these condition include cell-based therapy which promises the improvement of the system or organ, with the primary objective to regenerate cells and restore the normal function of those organs [3].

Diabetes is a chronic disease which occurs when the pancreas cannot produce insulin in sufficient amount, or when a human body is unable to use the insulin effectively. This situation may cause increased concentration of glucose in the blood (hyperglycemia).

The most common form of diabetes is “type 2”, or diabetes mellitus. This disease prevents your body from properly using the energy from food. Diabetes occurs in one of the following situations:

It is estimated that more than 1.5 million people die each year due to diabetes.

The WHO estimates that diabetes will become the 7th top cause of death by 2030 [4]. It is estimated that  21.3 million people in Indonesia alone will be affected from diabetes in 2030 [6].

Diabetes mellitus can be stimulated by eating excessive processed food, and from wireless radiation which has biological effects as detailed in PubMed (the US National Library of Medicine) peer-reviewed clinical studies. Wireless radiation leads to unsustainable healthcare expenditures across three epidemics.

Diabetes is the first epidemic: 1/3 American children will become diabetic in their lifetimes, and in some populations 50% of the population are diabetic.

Blood glucose is elevated and diabetes is triggered by EMF radiation from mobile phones and cell towers.

The huge problem with diabetes is chronic kidney disease, end stage renal disease, and hemodialysis. The other healthcare issue caused by electromagnetic radiation is related to the deterioration of mental health, manifesting in suicide, violence, and opioid addiction.

The 4 kinds of EMF exposures harmful to human health are radio frequency radiation, magnetic fields, “dirty electricity”, and electric fields, resulting from cellphones, multiple wireless networks, microwaves, smart meters, cell towers. Over half of current US Medicare spending on people age 65 and older was for CKD (“chronic kidney disease”), diabetes mellitus, or heart failure. All three conditions are very clearly summarised in international scientific literature as connected with EMF exposure, which we know to be harmful. Currently this is unregulated human subject research despite decades of evidence showing it is not safe.

What if something as simple as a chicken egg could be assist in normalising insulin secretion to rebalance blood sugar, and help the regeneration of stem cells throughout the brain and body?

A healthy fertilised semi-incubated chicken egg at the 9th day is a source of nutrients containing protein, lipids, vitamins, minerals and growth factors important for embryonic development, and protection from bacterial and viral infection[7].

Fibroblast Growth Factor (FGF) is responsible for the signal stimulation of early process cell development (such as establishing a pattern, proliferation, differentiation, and migration) forming a network [8].

First researched by a Canadian Doctor, Dr John Davidson, in the early 1900s, subsequently by the Norwegian Government, recently a team of researchers in Indonesia set out to identify FGF in fertilized incubated chicken eggs and examine the effectiveness of FGF induction to regenerate the pancreas stem cells of hyperglycemia mice [9],[10]

The conclusion is that the FGF from fertilized semi-incubated chicken eggs is able to help the process of pancreatic stem cell regeneration of hyperglycemia mice through rehabilitation of endocrine cell morphology.

Further, using FGF from fertilised semi-incubated eggs of chickens can increase the capability of cells for insulin secretion.

FGF mediates cellular responses by binding and activating the four groups of the receptor tyrosine kinase (RTK), as indicated by the FGF receptor (FGFR1-FGFR4). FGF also binds to heparin or heparan sulfate proteoglycans (HSPG) to activate the FGFR and to induce a mixed response that can cause cellular responses induced by appropriate growth factors [13].

The result of FGF identification using the ELISA scientific method is positive with a level of 219 ng/L. Histopathological study (the microscopic examination of tissue in order to study the manifestations of disease) indicates that the FGF induction of fertilized semi-incubated chicken eggs can rehabilitate the cell morphology of pancreatic endocrine and can also improve insulin secretion in pancreatic β cells.

The mitogenic and cytoprotective properties of FGF7 are already being put to advantageous use. Other FGFs, including FGF1, FGF2 and FGF4, have been tested in clinical trials and may eventually be used to treat cardiovascular disease.

The precise role of FGFs in mood disorders requires considerably more investigation 262, but it is possible that some therapeutic application will arise in this field, especially as so many of the FGFs are involved in brain patterning and neurological development.

Therapies that target RTKs are already common. It remains to be seen whether FGFR-specific inhibitors will have a mainstrean impact on the treatment of cancer.

The recent work that revealed the ability of small-molecule FGFR inhibitors to cause cell death in cancer cells is at least a proof of principle 65.

Currently, the development of inhibitors of the FGFR–PLCγ interaction looks promising because their concomitant use with RTK inhibitors may slow the onset of drug resistance.

Of the endocrine ligands, FGF21 currently holds the most potential as a drug target, owing to its beneficial impact in animal models of diabetes and its lack of toxicity.

Although recombinant FGF19 also improves aspects of the metabolic syndrome in mouse models, its ability to initiate tumour growth in transgenic mice as well as its expression in human tumours is a significant cause for concern. Further investigation of its side-effect profile is vital.

The involvement of FGF23 in disease makes it a particularly attractive therapeutic target. Antibodies against FGF23 or peptide analogues of the FGF23 C terminus should ultimately prove useful in combating human hypophosphataemic diseases. Increased levels of FGF23 in chronic kidney disease is a subject of intense study; further applications of the ligand to the treatment of renal disorders may yet be found.

FGF-based therapies are still relatively new. The broad biology of this family of growth factors is yet to be fully exploited in the treatment of human disease and increasing developments are expected in further understanding FGF biology and pharmacological application.

In addition, a number of subjective conditions, for instance energy levels, stamina, and subjective health were also measured. Virtually all of the study participants who took YTE experienced a significant increase in physical energy, stamina, and muscle strength.

Please contact us to receive more details on these and additional clinical trials.

7. Fodor, W.L. ( 2003). Tissue engineering and cell based therapies, from the bench to the clinic: Reproductive