What are Amino Acids?

The human body is approximately 20% protein and the basic building block of protein is amino acids. When we eat protein it is digested into amino acids in the same way that carbohydrates become simple sugars and fats become fatty acids. Because amino acids contain nitrogen they can form tissues such as organs, muscles, skin and hair.

Amino acids enable enzymes and neurotransmitters so they regulate almost every metabolic process in the body.

Which Amino Acids Are Used Where? 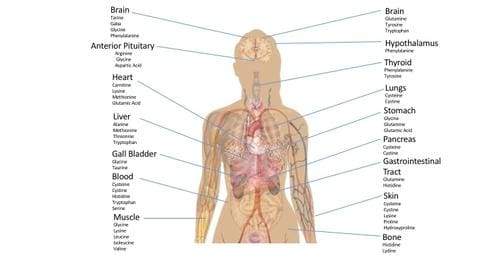 Health Evolution supplements contain ALL 23 amino acids in the ideal, natural proportions of genuine YTE®. We include the right dose of YTE® in the Health Evolution Amino Formulas, TeloMind, AminoBoosters, and AminoSerene, as used in clinical trials.

To get yours today: click here Health Evolution Shop

What Types Of Amino Acids do you need?
There are over 200 different amino acids of which 23 are really important amino acids essential for good human health.

Non essential amino acids can be produced inside the body but this production process can be restricted by our environment such as the pollution caused by burning fossil-fuels, the hormones fed to cattle, the intensive use of fertilisers in agriculture, and habits such as smoking and drinking, all of which can prevent our bodies from fully using what we eat.

Worse still is the amount of nutrition that is lost from our food through processing before we actually get to eat it...

By providing the body with optimal nutrition, amino acids help to replace what is lost and, in doing so, promote well-being and vitality.(1)

The 23rd amino acid is called Ornithine which is also contained in YTE® and therefore in all of our products.

Ornithine is a fascinating amino acid, claimed to be the most potent amino acid for stimulating the production and release of Human Growth Hormone from the pituitary gland.

HGH is a powerful rejuvenator - its use has the potential to reverse ageing by up to 10 to 20 years. Studies of Ornithine have shown the ability to regenerate the thymus gland, liver, heart tissue, enhance muscle growth and increase immune system function.

Ornithine has an anti-fatigue effect by increasing the efficiency of energy consumption and promoting the excretion of ammonia. This amino acid is not rich in meats or fish, so it is difficult to obtain from ordinary meals that would be enough to promote the anti-fatigue effect.

Some doctors recommend ornithine intake as a nutritional supplement in cases of physical fatigue. (18)  Ornithine is one of the important amino acids within YTE®. YTE® has all the amino acids in perfect natural balance.

Your kidneys convert ornithine into arginine, another amino acid that benefits your body in several ways. Arginine is a precursor for a compound called nitric oxide, which helps dilate your blood vessels when you require extra blood to your tissues. Arginine also helps your muscle cells produce creatine, a compound they need to contract.

Who needs amino acids the most?
Everyone needs a balanced pool of amino acids for optimum health but many people are suffering from amino imbalances because of poor and inconsistent intake of through their diets.

A recent study from Germany carried out by the DAK has revealed that older people in particular are more prone to suffering from malnutrition. “If the body is lacking in the minimum energy and nutrients, the body cannot carry out its bodily and mental functions. Without the necessary vitamins, proteins (amino acids), trace elements and minerals, there is a risk of debilities and metabolic disorders which can have serious consequences.”(2)

Older people are not the only ones who this applies to, for young people can also be affected by the negative consequences of a limited supply of nutrients. These include weight problems, hair loss, skin problems, sleep disorders, mood swings and/or erectile disorders but also arthritis, diabetes, cardiovascular imbalance (high cholesterol levels, high blood pressure) or even menopausal complaints.

What do each of the Amino Acids do in the body?
Amino acids are critical to almost every function in the human body - here is a list of some amino acid typical functions within the body:

Isoleucine
Plays a pivotal role in the energy supply of muscle tissue, which is particularly critical during periods of extensive exercise or in acute hunger periods.

Unless present in sufficient quantity in the blood, the body will access its storage reserves, which will inevitably lead to a reduction of L-Leucine and muscle mass. This effect must be avoided by athletes trying to build muscle mass.(3)

Leucine
Plays a central role in the metabolism of muscle tissue therefore contributing to both its generation and preservation. It is an important building block for many proteins and therefore supports various healing processes. A deficiency, however, can also be caused by an undersupply of Vitamin B6.(3)

Lysine
Plays a particularly important role in the immune system.

It is also involved in protein biosynthesis, especially in building collagen together with the amino acids Glycine and Proline. An Lysine deficiency may therefore result in broken skin, fragile nails and in extreme cases loss of hair.

Lysine is thought to reduce the processing of arginine of the herpes virus, because both amino acids use the same transport system. In cases of herpes infections arginine should be consumed together with Lysine. There is also evidence that it increases the effectiveness of arginine, because it slows down the transition of arginine from the vascular system into the muscle cells.(4)

There is also evidence that Lysine can reduce blood sugar in Diabetes Type 2 patients.(5)

Methionine
Plays many roles in the body as it is the only amino acid containing sulphur. This effects many areas one prominent one being joint health because joint cartilage because it requires sulphur for its production. Studies of both healthy and arthritic patients show that healthy people have 3 times the level of sulphur than those suffering arthritic conditions.(7)

Tryptophan
Has lots of positive effects on the human body, it can be used to combat certain medical conditions and contribute to recovery. Several studies have already been carried out in order to confirm these assumptions, and have convincingly proven the effectiveness of essential amino acids.

A study in 2010 examined, for example, to what extent Tryptophan can halt the spread of a common liver condition (steatohepatitis).(9)

The less Tryptophan there is in the body, the more serious the symptoms of this condition; Tryptophan can therefore be used to relieve irritable bowel syndrome.

Finally, this protein substance has already been proven to be very effective in combating depression, and it has become the most important anti-depressant which does not have side effects.(11)

Alanine
Is a critical player in the body’s protein biosynthesis and has certain regulatory functionality. Muscle protein consists of approximately 6% of L-alanine. 30% of the L-alanine in the blood is synthesised by muscle, which demonstrates its importance to the overall metabolism.

Alanine also helps to support the immune system and prevent kidney stones. Alanine has been shown in studies to protect the prostate gland and is even thought to be a potential treatment for prostate cancer.(12)

Alanine was also shown in a 2002 study to be beneficial to the condition of diabetes.(13)

Arginine
This is one of the most well known amino acids and it has a host of well known and documented benefits for the human body such as:

In 1998 the Nobel Prize in Physiology or Medicine was won by Luis Ignarro, Robert Furchgott and Ferid Murad for their research on the benefits of Nitric Oxide (NO) and its primary reactant (building block) Arginine.

Click here for more information including a video of Dr Ignarro explaining the various health benefits gained from Arginine supplementation.

Cysteine
Cysteine has many roles in the body but a notable one is its role in helping the body to produce glutathione which helps to protect tissues and organs and has an anti ageing role in the body through protection of cells. Cysteine helps to eliminate free radicals and plays a role in keeping our blood healthy and our immune system strong.

Cysteine is also being used to help treat osteoporosis because it was proved in a study that osteoporosis sufferers had lower levels of Cysteine.(14)

Glutamine
Used enormously throughout the body, glutamine represents 60% of the free amino acids in the body. Glutamine plays many roles in healthy skin and crucially is used to keep our bodies acid alkaline balance in check. Glutamine is vital in the body's energy and immune system as it can be converted into energy when the body needs to. As an important regulator, glutamine plays a role in good concentration and sleep as well.

Histidine
The preventative and therapeutic potential of histidine has not yet been fully explored, although several studies have already been carried out which have proven the effectiveness of this vital substance in medical treatment.

Histidine can lower blood pressure (15)  As histidine relaxes the blood vessels, it can get rid of hypertension and help prevent cardiovascular conditions, such as arteriosclerosis and heart attacks.

Researchers also proved that the daily consumption of a nutritional supplement containing histidine can reduce the risk of cardiovascular conditions by up to 60.9%.

A further area where the use of histidine supplements is important is the treatment of chronic kidney failure, which is particularly common among the elderly. A low concentration of histidine in the blood plasma increases the inflammatory activity of the body and leads to a rise in oxidative stress, so supplementation of histidine is directly associated with a reduced mortality rate. (16)

Furthermore, it has recently been discovered that histidine, in combination with zinc (which is made easier to absorb into the body by the amino acid), can be effective against colds. A study was carried out with over 40 participants to investigate to what extent the intake of zinc and histidine can minimise the duration of a viral or bacterial infection. The researchers came to the conclusions that the consumption of both these vital substances together shortens the length of a common cold by an average of 3.6 days. (17)

Health Evolution supplements contain ALL the amino acids in the ideal, natural proportions of genuine YTE®. We include the right dose of YTE®, as used in clinical trials.

Buy now while stocks are available at healthevolutionproject.com/collections